I didn’t manage to meet with Sanja when I was in Croatia, but I couldn’t omit writing about her work here. Her work from the 1970s was truly pioneering, and she remains one of the most significant contemporary artists, and not only in the field of performance art. There are two aspects of her earlier work that interest me: her performative work from the 1970s that deals with the issue of the relationship with the artist and the viewer, and her work that deals with gender and the mass media in contemporary society, especially insofar as the issues that she raised in the 1970s remain relevant to this day. 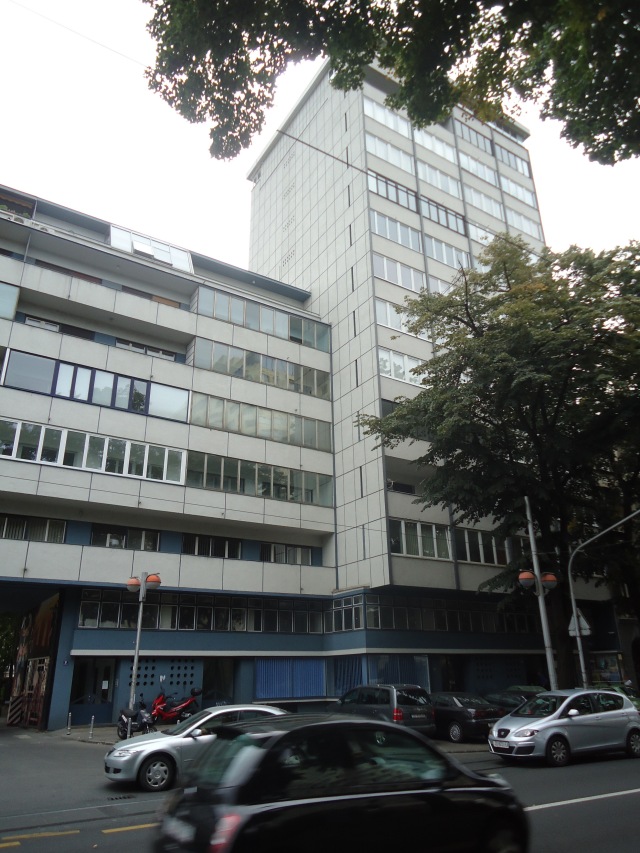 Point 1 of the Triangle : Ivekovic’s apartment building (my guide was unsure as to which of the two buildings it was)

Perhaps one of her most well-known works is Traingle, performed on May 10th, 1979, on the occasion of a visit by Tito to Zagreb. The piece was about an interaction between three people: the artist, who sat on the balcony of her apartment on Savska Street, General Tito, and the security officer watching Ivekovic’s building from above. As the artist lived on the street that the motorcade passed through, there were police and security officers both on the street, and also on the balcony of a hotel across the street, which nowadays is the Westin Hotel. During the motorcade, Ivekovic appeared on her balcony, sat down, read a book, drank whisky, and made gestures so as to appear to be masturbating. Although no one on the street below could see her, due to the cement balustrade, one can only assume that the police officer surveilling from the roof of the hotel communicated, via walkie-talkie, with the officer on the street, who proceeded to enter the apartment building, knock on Ivekovic’s door, and order that all “persons and objects are to be removed from the balcony.” The piece highlights the manner in which the gaze exerts power over the individual in everyday society – not only in Tito’s Yugoslavia – as well as the manner in which gendered bodies are subject to public control, even in the (semi-)private space of the home. There was no reason to remove Ivekovic form the balcony, because no one from the motorcade below, unless they had a far-reaching periscope, could see the figure of Ivekovic or what she was doing. Nevertheless, the state had to exert control over her and her actions. The piece is significant because it engages with several of the issues that recur in her work: power structures and relations, the gaze, and gender.

Point 2 of the Triangle : now the Westin Hotel, the building from which Ivekovic was spotted

In 1977, Ivekovic performed Opening, during which she greeted all of the attendees of her exhibition opening with her mouth taped shut and a stethoscope that broadcast the sound of her heartbeat through speakers installed in the gallery. The artist establishes a more intimate connection with the viewer, who can hear the internal workings of her body – her heartbeat, yet she does this by closing off the usual form of communication with the viewer, insofar as she cannot speak. She also becomes a body that simply exists for the consumption and observation of the viewer, as opposed to an active and vocal one, interacting and engaging with the audience through verbal communication. Similarly, that same year, the artist staged Inter Nos, a video performance during which the artist appeared on the TV screen at an opening, connected with her audience via closed-circuit. She could only interact with her audience through the intermediary of the camera and its projection on the TV screen, however the interaction among attendees (the title translates as among/between us) was foregrounded in the absence of the artist.

The artist’s interest in video as both a bridge and that which creates distance extends to her exploration of gender. A number of her works from the 1970s probe the notion of beauty as created by the mass media, remaining focused on the specific attribute of make-up and cosmetics. In a 1975 piece entitled Double Life, she paired 66 photographs of herself from her private collection with mass media images showing women in similar poses. Since many of the photographs of Ivekovic pre-dated the ones from the journal, she demonstrates how ingrained these gestures of femininity are in our society, and perhaps suggests that they are not only constructed by the mass media. One year later, her video performance, Make-Up, Make-Down shifts the focus to the rituals associated with applying make-up and beautifying oneself. Here, the camera remains focused on the action of application; the subject’s face is not visible, though she is seen slowly and sensuously handling tubes of lipstick, bottles of lotion, tubes of mascara. The daily and often unconsciously undertaken task of applying make-up is turned into a fetishistic ritual. Instructions No. 1, a video performance also from 1976 turns that ritual into a primitive, tribal affair. Instead of applying make-up to her face, the artist draws arrows indicating the direction and manner in which make-up or other cosmetics are meant to be applied, according to the instructions. Her face ends up looking like she is prepared to do battle, suggesting that contending with contemporary standards of beauty is in fact like going to war, with women caught in the crosshairs.

In the photomontage Diary, the artist juxtaposed the make-up removal pads and cotton balls that she used over the course of a week with a glossy image from a women’s magazine depicting a woman in garish make-up. She followed this piece with the performance Un Jour Violente, where she applied make-up and dressed according to an advertisement in Marie Claire, which told women how to create a glamorous look for themselves: “One day, violent: today you are dazzling, you don’t yourself know why, you feel irresistible joy, you want sparkling drinks, intensive light, unusual hairstyles, provoking dresses.” Here Ivekovic draws attention to the battleground that is the female body, playing on the rallying cry of the magazine that pairs violence with glamor, beauty and desire.

It should be remembered that none of the communist or socialist countries in Eastern Europe, including Yugoslavia, underwent a sexual revolution as in Western Europe and North America. In countries where gender equality had theoretically been achieved, there was technically no need for such a paradigm shift. The reality, however, was much different, and the fact that Ivekovic has made such challenging gender-based work is very unique in this region. But the issues she addresses are relevant for audiences on both sides of the divide, as these constructed notions of beauty and mass media images of women, not to mention the market for cosmetic and beauty products, were quite notably manufactured by the West, and consumed both in Western Europe and North America as in socialist Yugoslavia, which did experience a different free market than its communist neighbors. Even more poignantly, Ivekovic’s work still resonates nowadays; while the precise look of the jour violent may have changed slightly since the 1970s, the pressure on women to look good and conform to standards presented in the media remain in place to this day.