Throughout my travels in Albania and Kosovo, I met a number of people who told me: you have to meet Astrit Ismaili! I was told many things about him and as his work: that he is a very deep and thoughtful artist, very nice, doing very interesting performative and participatory artwork. I was told about one project that he was involved in: PRISHTINË – mon amour, and, as was probably the intention of the piece, I fell in love with it right away.

I was lucky to meet with Astrit, as he is currently working on a new performance with some partners from Germany, and they were in rehearsals all day when I was in Prishtina. The person I met lived up to every expectation – he was just as everyone described him to be.

Astrit began by telling me about PRISHTINË – mon amour, a project that really defies categorization. It was simultaneously a performance, installation, participatory art project and social project as well. Organized by three project leaders (Rina Kika, Astrit Ismaili and Tobias Bienz), in the end it involved 180 participants from Prishtina and other cities, all of whom came together to make such a massive undertaking possible. The result of the project was that it reclaimed a piece of public space in the city – the Palace of Culture, Youth and Sports, or, as it is locally known, Boro and Ramiz, and constructed a massive performance that would comprise performances by several artists, all of which combined to form one big performance. In effect, the project was a performance in and of itself, because of the preparatory work involved, and also the mobilizing of participants it entailed.

In order to understand the project, it is necessary to know the history of the building and its place in the former Yugoslavia, Kosovo, and Prishtina. It was built in the late 1970s as a multi-purpose venue, to be used for sport and cultural activities, but also including offices and shopping spaces. It is a massive concrete edifice in the center of downtown Prishtina, and its spikes can be seen from all over town. In 2000, an electrical fire left part of the building unusable, and part of it started to become used unofficially as a parking lot. The alternative name for the building, Boro and Ramizi, comes from the names of two partisan fighters, Boro Vukmirovic and Ramiz Sadiku, a Serb and Albanian who together fought the fascists in World War II. They were the perfect symbol of inter-ethnic harmony in Tito’s Yugoslavia. PRISHTINË – mon amour project turns this idea of unity and togetherness into a reality without any hidden political or other agenda. In the end, it brought the community together, and created a memorable for the inhabitants of Prishtina, that anyone could be a part of.

The idea to do a project related to Prishtina and its inhabitants actually came from outside of Kosovo, and was the result of the impression that the city left on Tobias Bienz, one of the project leaders. Tobias is an actor, theater maker and musician from Switzerland, and he met Rina, a lawyer from Prishtina, and another of the project leaders, in Italy. Some time later, he visited her in Kosovo. “It was that visit that changed my life,” he told me. “I fell in love with her and with Prishtinë. I talked with a lot of people who where burning about everything possible and the place became a part of me.” Eventually, Rina introduced Tobia to Astrit, whom he told about his idea for a project, and Astrit showed him the potential for the site of the event: Boro and Ramizi.

In order to facilitate the project, Astrit and his collaborators found a house nearby that they rented, and called it Baushttellë (construction site, in German), which was a home base where those participating in the project could stay and also prepare their work. So the project consisted of two performative spaces.

From there the artists had to clean up the building and make it ready to house to performances that were to inhabit the building on the final night of the project – the final performance – on September 8, 2012.  There were over thirty artists and performers with work (either performance or installation) on display, and the event was attended by over 2,000 people. 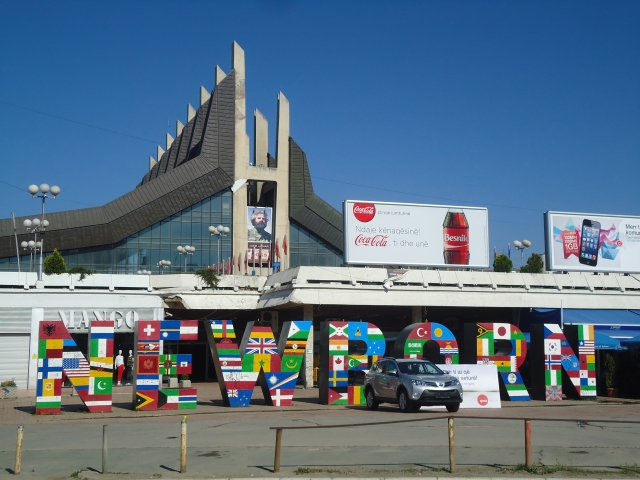 The Palace of Youth and Sport (Boro and Ramiz) in Prishtina

It is fitting that in front of Boro and Ramiz sits “NEWBORN,” the typographic sculpture that was unveiled on February 17, 2008, when Kosovo declared its independence. Fitting, because what Astrit, Tobiaz and  Rina did was essentially give new life to this potent building and symbol by filling it with life – live actions and performances, as well as live spectators. After beginning the project, Astrit later learned that he had actually performed in that building as a child, taking part as a singer in concerts and cultural events. But the artist informed me that he did not perform in PRISHTINË – mon amour because he needed to be able to watch, to witness the event.

The entire project struck me as incredibly ambitious. In a brand new country with a developing economy where there isn’t necessarily a tradition of volunteerism (this is common in most post-communist countries in Europe) the idea that a group of young artists thought that they could mobilize dozens of artists and amateurs (because many of the people taking part had never done such a thing before) seems impressively bold. But Astrit told me that he had imagined it this big from the moment he got involved. Furthermore, he knew that it had to be this building, and he even imagined all of these performances taking place simultaneously even before they had any of the participants. But I suppose that it is this level of risk that made the project just so striking.

Astrit is an artist who thrives on risk. He told me of other performances that he did – photographic performances where he pushed himself to extreme limits of fear, to conquer those fears and see just how far he could go. In talking to Astrit, Marina Abramovic’s name came up, a name that I have heard quite often so far in Albania and Kosovo. Her presence is still here in the Balkans. Like Abramovic, Astrit pushed himself to his own personal limits – for example, wearing a dress in public, or getting nearly naked in the middle of a crowded street in Prishtina at rush hour. This last performance reminded me of Croatian artist Tomislav Gotovac’s performances in Belgrade (1971) and Zagreb (1981), where he ran naked through the city streets and kissed the asphalt. The performance in Zagreb was even called Zagreb, I Love You. While for Astrit this performance was very personal, and more about limits and risk for himself, for Gotovac it was about being intimate and close with the people of these cities, his fellow Yugoslavs, as well as provoking the system.

Astrit sees Albanian tradition as steeped in performance. He described to me the process of cooking traditional dishes as encompassing repetition, of doing the same thing over and over again, and likened these folkloric traditions to performance. In fact, the theme of PRISHTINË – mon amour was repetition. So for Astrit, this project was at the same time steeped in local tradition, and yet also future-oriented, involving reconstruction and regeneration of a cultural monument, icon and public space.

Astrit studies theater, and it is interesting that for him performance comes from the dramatic traditions, as opposed to the visual arts. His performances, however, are just as controversial as many of those by his fellow performance artists, past and present. A recent photographic performance, where he exposed his backside in front of prominent buildings and monuments in Prishtina (the statue of Skanderbeg, Albania’s national hero; the National Theater, the government building, and the central mosque, to name a few) resulted in the artist being fined for disorderly conduct. For Astrit, however, the intention was as innocent as Marilyn Monroe’s when her character stepped over a subway vent that blew her skirt up in The Seven Year Itch  (1954). He titled the performance Aber ich habe keine unterwasche auf (Oops, I Have no Underwear On). It seems that Astrit’s work suffered the same fate as that of Seward Johnson, whose sculpture of Marilyn with her upturned skirt was recently removed from one of Chicago’s main squares. The two, however, were controversial for different reasons. Johnson’s sculpture was thought to be an eyesore, while Astrit’s work, in pushing boundaries, revealed precisely the limits and boundaries restricting him at that time.