On Friday, March 27, 2015, together with friends and colleagues from the University of Aberdeen, we presented “Contemporancient”: a series of short performances that aimed to bring Ancient Scandinavian texts to life through the contemporary genre of performance art (a project created and initiated by Lisa Collinson, from the University of Aberdeen). Together, we performed four short performances based on Ancient Scandinavian texts at Aberdeen Art Gallery’s “After Hours: Extreme Makeover” event, which marked the closing of the art gallery for several years for renovations. The walls were empty, and we filled the art gallery with interactive and performative art. Together with Lisa and myself, we were also joined by Suk-Jun Kim, Irene García Losquiño, Blake Middleton, and Declan Taggart; Jasmina Zaloznik also assisted with choreography.

There were lines out the door to get into Aberdeen art gallery’s after hours: extreme makeover, where we were performing

None of us are performance artists. We are all researchers in various disciplines – music, Scandinavian studies, History of Art – who have an interest in presenting our research to non-academic audiences in a interesting and digestible ways, and also an interest in performance. We all attended a two-day workshop in Glasgow at the Centre for Contemporary Art, organised by Lisa Collinson, a researcher in Scandinavian studies, and performance artist Ruth Baker. After two days, we had created some interesting (performances), and later performed them at the CCA in Glasgow and 17 Belmont Street in Aberdeen. We were so excited to share these performances further that some of us re-worked them for the particular space we were assigned in the Aberdeen Art Gallery (the pink gift shop), and did the performances there. 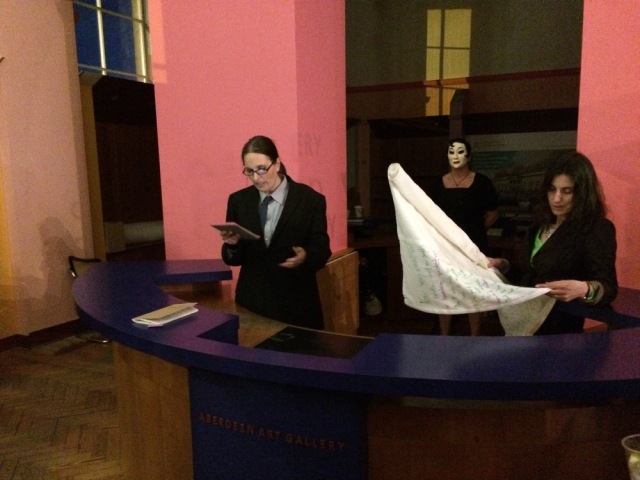 For example, my performance, “Bureaucracy” compared the text of Ancient Scandinavian Laws with UK migration law. By juxtaposing the two texts, one notices striking similarities in the way that laws are and have been written and constructed. In the performance, I read the laws written by the Home Office, and Lisa Collinson read the Ancient Scandinavian laws. Claire Organ stood behind us as the nameless, faceless bureaucrat behind the rules.

We had great feedback from the attendees. While viewers may have not understood exactly what we were intending to communicate with our performances, they still found them compelling, and, as I told the audience in my introduction, the most important thing was to hopefully grasp a bit of the sentiment or feeling behind the performance, rather than a literal understanding of what it might have meant.

As a researcher, it was strange to present my work through performance, but I have to admit it was quite fun and exciting – especially when working with such a great and supportive collaborative team – and I hope to do more performing quite soon! 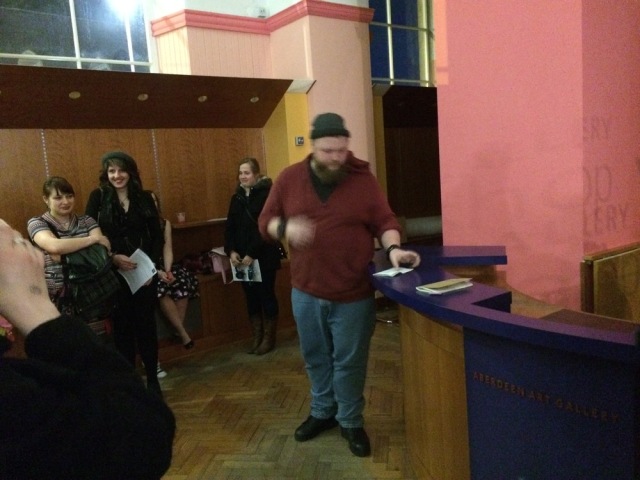 I am lecturer in History of Art at the University of Aberdeen, where I specialise in modern and contemporary art from Eastern Europe.
View all posts by Amy Bryzgel →
This entry was posted in Uncategorized. Bookmark the permalink.