A Lunatic on the Loose in Lithuania

The title of this post comes from a 2012 exhibition commemorating
the 50th anniversary of Fluxus, The
Lunatics Are on the Loose… European Fluxus Festivals, 1962-1977. I felt a
bit like a lunatic on the loose in Lithuania, slightly out-of-sorts after
exchanging Balkan for Baltic, 40C for 40F, and starting the next leg of my
adventure without having fully recovered from the last one.

Lithuania has a special connection with performance art in
that the founder of Fluxus, an international network of experimental artists
whose work was often performance-based, George Maciunas, was of Lithuanian
origin. He was born in Kaunas, and emigrated with his family in 1944. Possibly as
a result of his Eastern European origins, he was keen to spread his Fluxus
network through the region. Jonas Mekas, the experimental filmmaker, was also
from Lithuania, so this is a nation with a strong legacy of performance art
practices and avant-garde traditions.

The resonance of Maciunas and Mekas, however, was not strong
enough to completely penetrate the Iron Curtain, and the genre of performance art arrived rather late
in Lithuania. Two of the most historically significant and prominent
performance art manifestations come in the form of artist groups: Post Ars,
which was based in Kaunas, and Žalias Lapas (Green Leaf), which was
based in Vilnius. Both groups appeared on the scene in the late-1980s and
early-1990s, on the heels of perestroika
and glasnost.

That said, the Lunatics were on the Loose much earlier in
Vilnius, when in 1966 a Fluxus concert was organized by Vytautas Landsbergis (a
musician who later became a politician – the first head of state of independent
Lithuania) at the Pedagogical Institute. According to Petra Stegmann, it took
place with “no large audience, no press, no scandal.” Most of the people I
spoke to here said that they had heard something about it, but as it was such a
small and closed event when it occurred, it did not attract much wider
attention either at the time or later. 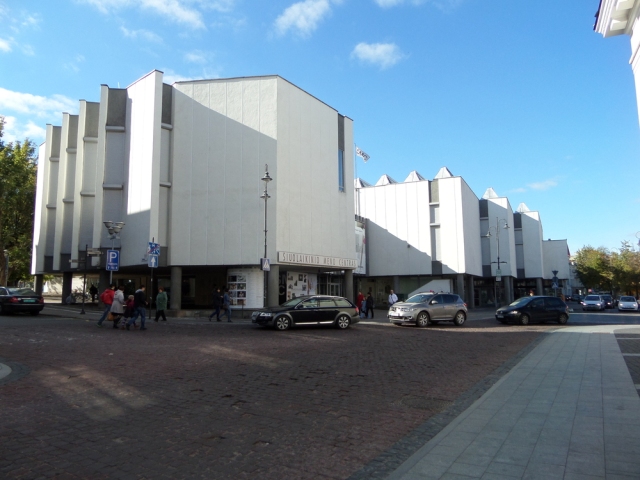 In addition to the Fluxus legacy, Vilnius is a city replete
with museums and spaces dedicated to modern and contemporary art, including the
massive National Gallery of Art, on the banks of the Neris River, and the
Contemporary Art Centre, a hulking modernist building erected in 1968, in the
very heart of the Old Town and city center, just opposite the Town Hall. Such a
museum is unique in the Baltics, as Estonia’s Kumu was only recently opened in
2006. Latvia,
however, is unfortunately still without a contemporary art museum, although
plans are in the works. Additionally, there is the Jonas Mekas Visual Arts
Centre, where works by Mekas and other Fluxus artists are exhibited. The Fluxus
Ministerija used to be located in Vilnius, but has apparently relocated to
Kaunas.

Viewing the video archive at the National Art Gallery of Lithuania

I had a number of meetings set up for my first few days in
the city. My first stop was the National Gallery, which houses the archives of
the former Soros Center of Contemporary Art, including a video library. I spent
much of the day glued to the TV, watching performances by Post Ars and Green
Leaf, as well as artists such as Dainius
Liškevičius and Evaldas Jansas. I was unfortunately unable to view the museum’s
collections, however, because the powers that be decided that the National
Gallery would be a nice headquarters for the EU Presidency, which Lithuania
holds during the second half of 2013. I guess they figured no one would be
interested in looking at the nation’s art during that time. 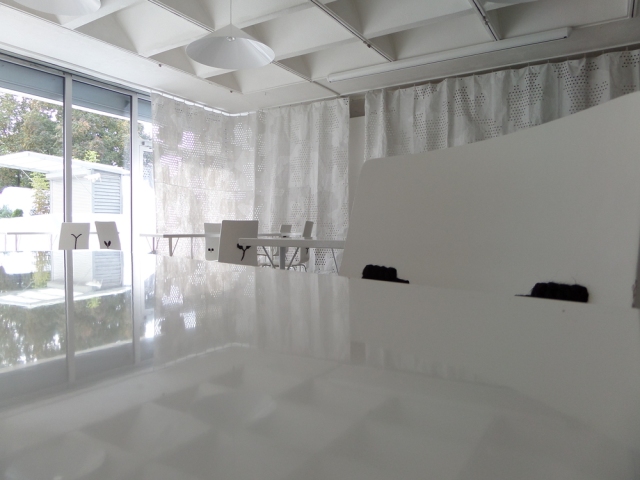 I was, however, able to check out the massive exhibition
space at the Contemporary Art Centre, but what I found most intriguing there
was a small room tucked off to the side, the George Maciunas Fluxus Cabinet,
which housed a collection of Fluxus materials. The walls of the room are even
papered with a film still of Yoko Ono’s Flux film No. 4, which features a series close-ups of famous peoples’ bottoms
as they are walking. I also spent quite a bit of time in their reading room, making use of their extensive library of not only Lithuanian art, but also Eastern European and contemporary art in general. 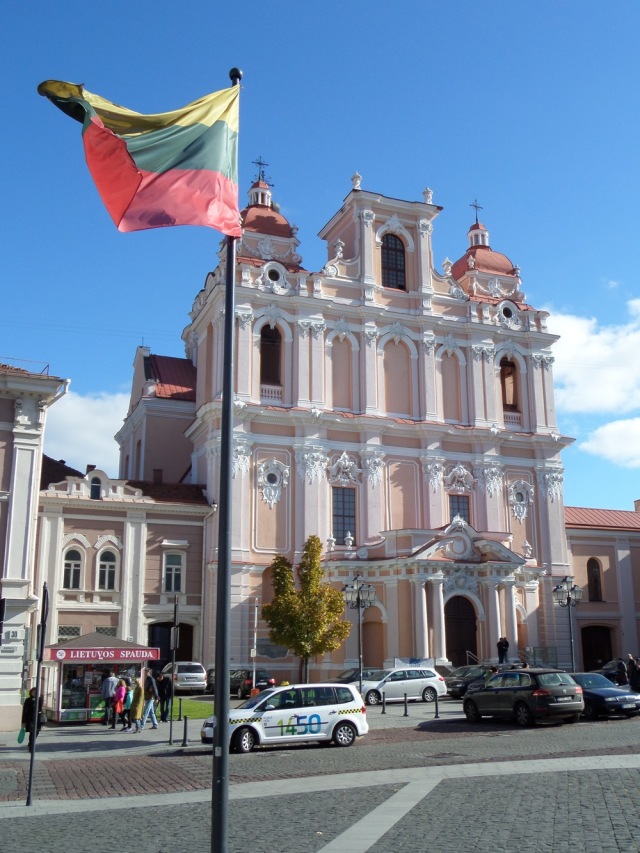 There is no shortage of Baroque architecture in Vilnius

Aside from being impressed with all of the artists that I
met on this trip, I was also very cold – literally. Absolutely every room I had
a meeting in or needed to work in was freezing. During the day it was around
40C, getting down to freezing at night, yet the city hadn’t turned the heat on
yet. I remembered this unique phenomenon from when I lived in Latvia. But having
become accustomed to being able to control my own heat for the past several
years, I found it very difficult to function in this environment, and I guess
my body did, too. The result was that I got sick halfway through my trip, which
limited what I was able to complete during my remaining days in Vilnius.
Luckily, I had gotten most of my important meetings out of the way before this
happened, especially because at one point I lost my voice, but it also meant
that I wasn’t able to check out the Jonas Mekas Visual Arts Center or attend an
Open Studio, featuring a performance by the young artist Jurgis Paskevicius at
the Rupert Art and Education Centre. Although these weren’t essential to my
research, it was disappointing to miss out. That will teach me to travel in the
Baltics before they’ve turned on the heat!

Art historian Elona Lybute has described Lithuania’s art
from the early part of the twentieth century as A Quiet Modernism, and indeed that was my impression of the scene
here in general. There are definitely a lot of art venues, and several artists
have made very unique contributions to the genre of performance art, but
overall the city, and the scene, seemed to me very quiet, calm, serene. That is
neither a good nor bad thing, but just one person’s subjective observation
during a very short and abbreviated trip.