Zagreb, I Love You!

So many museums to choose from!

I was really excited to get to Zagreb, for several reasons.
Firstly, it has a brand-spanking new Museum of Contemporary Art, with a
permanent collection consisting of contemporary art from Eastern Europe, which
is and has been open to the public, with no immanent signs of closing.
Considering the fact that much of my summer consisted of walking by closed art
museums – either because of renovations/reinstallation (Podgorica, Pristina,
Skopje) or financial reasons (Sarajevo, Belgrade), I was excited to be in a
city that had one. But Zagreb has not one, but many museums – the Modern Art
Gallery, Museum of Arts and Crafts, Museum of Naïve Art (to name a few) as well as
the quirky (and touristy) Museum of Broken Relationships. The second reason I was
excited to get to Zagreb was because of the absolutely vibrant contemporary art
and performance art scene there – both historically and currently. This is the
city of Tomislav Gotovac, Sanja Ivekovic and Dalibor Martinis, to name just some of the internationally renowned and celebrated artists. Zagreb, like
Belgrade, had an active Student Culture Center during the 1970s, where artists were
able to experiment freely, with virtually no restrictions. I had a number of
meetings set up with some of these artists, and I was certain that these
contacts would only expand once I was on the ground. As it turns out, I was
right.

I arrived in Croatia late on a Wednesday night. The next
day, I had a meeting with Darko Simicic, who is in charge of the Tomislav Gotovac
Institute, an organization dedicated to promoting and preserving the artist’s
life and work. We met at Gotovac’s former apartment in the city center. Much of
the place remains as it was during the time that he lived there, but parts have
been cleared out (Gotovac was an eccentric collector of all objects) to make
the space more manageable. I couldn’t have had a better first meeting in this
city. Gotovac’s work in body and performance art is really fundamental to the
scene in Zagreb, as it has been revisited and referenced by artists after him, such
as Vlasta Delimar, for example. Gotovac was also key in connecting the artistic
scenes in Belgrade and Zagreb, as he spent several years living in Serbia in
the 1970s. His first streaking performance even took place
in Belgrade, as part of the film Plastic Jesus. He later revisited streaking in Zagreb in 1981, in a performance entitled Zagreb, I Love You!

The next day I set out for the Museum of Contemporary Art, a
hulking building that sits on the other side of the city, far from the historic
center. I was already familiar with the architect of the building from my stay
in Dubrovnik. In addition to designing this museum, Igor Franic was also the author of a war monument that sits just on
the edge of Dubrovnik’s walled Old Town. The monument has its share of detractors, owing
most likely to the form and shape of the structure. In fact, when I first
passed by the monument, I completely ignored it; its flashing lights and
kiosk-like construction gave me the impression, from a passing glance, that it
was some sort of advertisement. The fact that the Norwegian Cruise Lines
meeting point was directly in front of it only confirmed that theory in my mind.
I later learned, after meeting with Bozidar Jurjevic, that this was in fact a
war memorial. The artist staged his own protest against it, with a performance
piece that he felt more appropriately honored the war dead.

The museum itself also has its share of critics. I spoke
with a number of people who didn’t like it, thought it was too big, that the
layout was confusing, that it didn’t appropriately integrate into or relate to
its surroundings. I did agree with some of the criticisms – for example, the
layout was confusing, and it was difficult to know which way to go in order not
to miss any of the collection. But there were also aspects of it that I liked.
Upon the approach to the museum, I was immediately struck by the similarity
with the Pompidou Center in Paris, with the open square in front of it that serves as a
transition between the space of the city and the space of the building, and
with its downward slant serves to welcome people in. The Museum of Contemporary
Art in Zagreb also had this approach, except that the ramps slant upward.
Regardless of the criticisms of the building, it has a fabulous collection of
(mostly Croatian) contemporary art. I have to admit I found it funny that
people were being critical of the museum when I had just come from so many cities
where people would envy a museum even half as good, but I guess that it is
always good to keep one’s critical eye honed.

Later in the week, the artist Sinisa Labrovic kindly invited
me to dinner at his house, with his family. Before I met him, I looked through
his website, and was struck by the manner in which the artist uses unassuming
and subtle gestures to convey complex ideas. The front page of his website
shows the artist selling a piece of his skin, and I also noticed a piece
entitled Perpetuum Mobile, in which
the artist attempted to drink his own urine, first directly from his penis and
then, when that failed, from his cupped hands. Needless to say I was a bit wary
of anything offered to eat or drink at his house, but my fears were allayed by
Sinisa and Snezana’s (his wife) wonderful hospitality.

That hospitality continued, as Sinisa kindly invited me to
join him and Snezana a dinner party the next night among a company of
performance artists, artists and art historians. I had been wanting to meet
Marko Markovic, who has been living in New York for the past year, and not only
was he there, but he also played chef for the evening. I met a number of other
artists there as well, and the company was fantastic. I also made an
interesting discovery along the way. A few days earlier, I had met with Goran
Trbuljak, and we talked about his 1972 piece Referendum, where he asked passersby if they considered him an
artist; they had to fill out a ballot which they marked “yes” or “no.” When I
asked him who photographed the piece, and why it was shot from a bird’s eye
view, he told me that the photos were taken from the studio of photographer Toso Dabac.
On the way up to the dinner party, in the staircase I passed a sign that said
“Dabac Photography Studio,” and I realized that I was in the building from
which the photographs of Trbuljak’s performance were taken.

The building where Ivekovic staged Triangle   in 1979 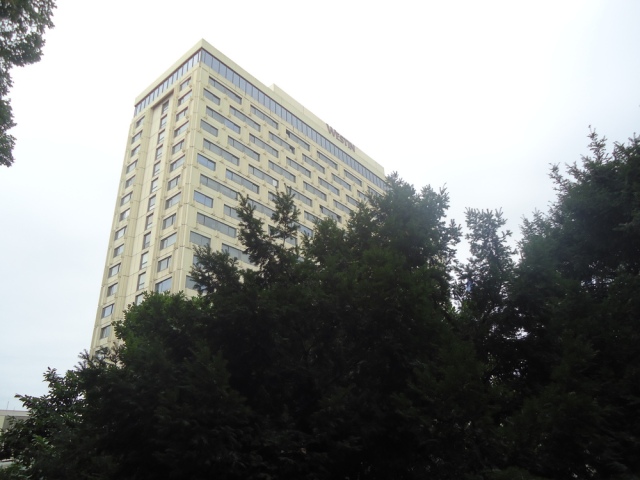 The Westin Hotel. Once the Intercontinental Hotel, which formed one point of Ivekovic’s Triangle   (1979).

Later in the week, I met up with Darko Simicic once again,
and he was kind enough not only to field my numerous questions about Gotovac,
but also showed me a few key places of interest in the city. First, he showed
me the M. Sira frame shop at Preradoviceva 13,
location of Studio G, where the Gorgona
group, an avant-garde artistic group, held
their exhibitions in the 1960s. Then, he took me to the location
of Sanja Ivekovic’s piece Triangle,
and together, we “triangulated” it – observing the balcony where Ivekovic sat
in 1979, on the day that Tito’s motorcade came by on the street below. It was May 10th when she came out onto the balcony to sit, a glass of
Ballantine’s whiskey in her hand, and some foreign books on the table next to
her. Then, she pretended to masturbate. Across the street, we saw the rooftop of the Intercontinental Hotel (now Westin)
from which she was observed by the police, and the road on which Tito drove by.
The police completed the “triangle” by going across the street, ringing her doorbell,
and asking her to remove herself (and all objects) from the balcony. Feeling
inspired by revisiting these spaces, I walked back to Ilica Street, which was
the scene of Gotovac’s 1981 performance Zagreb,
I Love You! From number 8, I retraced his steps to Ban Jelacic Square.
Unlike Gotovac, however, I was fully clothed, and not yelling “Zagreb, I Love
You!” over and over again, which is what he did in the performance. I am not
that brave!

I also spent quite a lot of time at the Flower Market Square,
which was not only my meeting point with several artists, but also the location
of a number of Gotovac’s performances. Nearby is the public sculpture Landed Sun (1971), by Ivan Kozaric,
which Bozidar Jurjevic used in two of his performances, in 1997 and 2007, and
which he plans to repeat again, every ten years.

I had very little down time in Zagreb at all. (And very little time to write!) When I wasn’t
meeting with artists or art historians, I was visiting museums, or using the
library at the Center for Contemporary Art. Everywhere I turned I recognized a
landscape from a photograph of a performance that I had seen, whether it was
Vlasta Delimar’s Lady Godiva, or one
of the exhibition-actions by the Group of Six artists, who held these public
artistic actions in the 1970s in order to have greater contact with their
viewers. But it is not only the fact that Zagreb has such a fertile artistic
scene that made this trip so successful. The people that I met who are part of
that art scene (and I feel like I met most of them!) were some of the kindest,
friendliest, and most open and helpful people I encountered. In general I got such a
positive feeling from all of my interactions that it made for a truly enjoyable
week. In fact, this trip was almost so effortless it didn’t even seem like
work. After my time in Zagreb I have a new understanding of the title of
Gotovac’s performance – Zagreb, I Love You,
indeed!