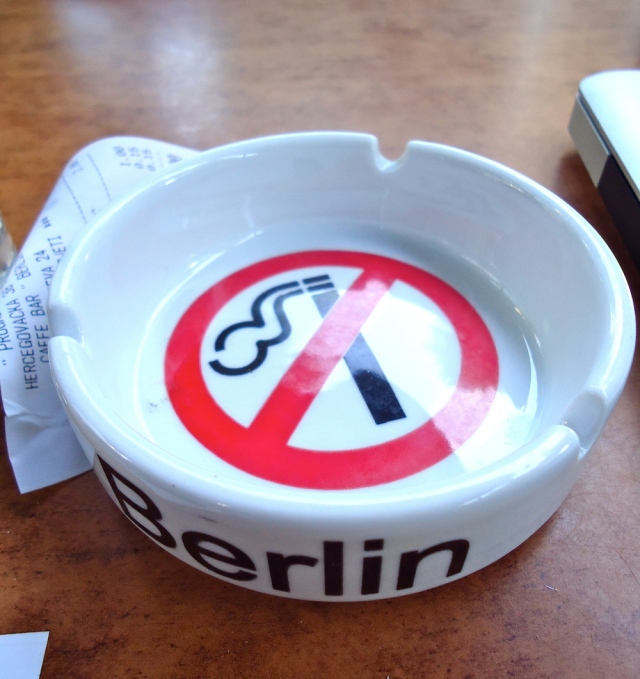 No one is doing performance art…and yet they are. I thought that this ashtray from the Berlin Cafe in Podgorica was a perfect illustration to this happy contradiction.

Throughout my trip in the Balkans, I was constantly told by
artists, art historians, and people in the art world that “no one here is
really doing performance.” I didn’t believe it, but then again, I didn’t really
have a lot of examples of artists from these particular countries that worked
in performance. Many of them, in fact, had left the region already. The
Albanian artists I knew of who had done performances – Adrian Paci, Anri Sala and Flutura & Besnik Haxhillari – were living in Paris, Milan and Berlin, respectively,
and the same goes for one artist from Kosovo, Sislej Xhafa (he lives in Italy). The only Montenegrin performance
artist I knew of, Ilja Soskic, currently lives in Rome. So I took these people
at their word, but also challenged that word.

After telling people about my loose attitude toward the
genre, stories started to emerge. “Oh, well, this person does things that are
kind of like performance…that person did a performance once….this person is
doing photography, it is not really performance but they are photographed
performances.” So, you see, there it is. Because I was not looking for the
Marina Abramovic of each country, the one person who started doing performances
as a teenager and never stopped, who only does performances, who always uses
only his or her body and moves it, pushes it to the limits, and is always
present. While that is great, there are all types of things that can be
performative without the artist necessarily “present.”

The spirit of Marina Abramovic is alive and well in the
Balkans. We all know that she got her start with the circle of artists at the
Student Cultural Center in Belgrade. She was born there, although her parents
were born in Montenegro. I think that virtually every person I spoke to on this
trip referred to Abramovic. OK, maybe not every single person, but it really
felt like it. I found this interesting, because the reference for Central and
Northern (Eastern) European artists seems to be different. There, it was
Fluxus, Joseph Beuys and the Viennese Actionists that seemed to be the
reference point. But in the Balkans it is Marina.

And maybe this is the reason that people are reluctant to
admit that they are doing performance. Maybe her presence is so overwhelming,
the legend is too great, that no one thinks that their performative work could
compare, or could come close to the magnitude that is Marina Abramovic. But I
think it can. There is a lot of interesting and exciting performance art
happening in Albania, Kosovo, Macedonia and Montenegro, you just have to look
for it, and you have to be persistent. The longer I was in each place, the more
examples people found. By the end of my trip, the claim that “there are no
artists working in performance here” was pretty much refuted, by the very
people who told me that to begin with.

And this is where that Balkan flexibility came in handy for
me. Until now, my research had been primarily historical. I am mainly
interested in exploring and uncovering the artists who were working in performance
in the 1960s and 1970s, during the heyday of that genre, both here and in the
West. In the four countries I visited on this trip, there wasn’t really a
strong tradition of performance during that time, mainly – I think – because
these countries were on the so-called periphery. Some weren’t even countries at that time.
Montenegro and Kosovo were part of Yugoslavia, and even after they weren’t,
they were part of Serbia. Macedonia was also in Yugoslavia, and Hoxha distanced
Albania from all of the socialist and communist countries in the region. In
Albania, Hoxha ran such a tight regime that there wasn’t really any underground
to speak of; most experiments that veered from the state-prescribed Socialist
Realism took the form of unconventional colors or forms in painting. Furthermore, Macedonia,
Kosovo and Montenegro were on the periphery of Yugoslavia. Much of the state
funding went to the larger hubs within that country – Belgrade, Zagreb and
Ljubljana, and that is where much of the artistic activity was concentrated at
the time. People in Montenegro told me that most people went to Belgrade to
study, because Titograd, as Podgorica was called during those days, didn’t have
much to offer. Consequently, Belgrade, Zagreb and Ljubljana developed thriving
artistic scenes. That is not to say that art in these smaller countries did not
thrive, but rather the scenes were smaller and less well-known – at least
during the Yugoslav period.

So, just like in a performance, I had to adapt and change to
the situation I found myself in, and to the reactions of the audience. Instead
of artists from the Yugoslav era, I met with and discovered younger artists,
fresh from art school, utilizing the medium of performance, along with other
genres and techniques. Their sources were not only local (and by local I don’t
only mean local performance artists, but also local and indigenous traditions,
including folk traditions, as well as current trends and events), but also
international, as younger generation artists travel
frequently, and participate in residencies across Europe and in the US. Many
of these artists spoke about the necessity of going abroad, to get ideas and
develop as artists. By broadening their world view, they are able to enrich
their own artistic creations back at home.

I am happy to report that the spirit of
Marina Abramovic is alive and well in the Balkans. Most artists still speak of
her with reverence. I only hope that they don’t allow the shadow of this
amazing Balkan “grandmother of performance” art eclipse their equally wonderful and
inspiring work.

I am lecturer in History of Art at the University of Aberdeen, where I specialise in modern and contemporary art from Eastern Europe.
View all posts by Amy Bryzgel →
This entry was posted in Uncategorized. Bookmark the permalink.